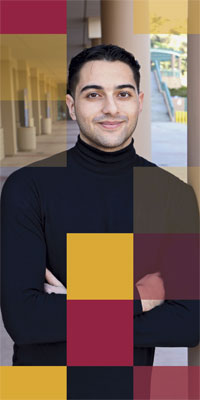 William Melikyan was destined to attend Glendale Community College. His mother Armine was pregnant with him when she started at GCC in 1998 and he was in attendance when she graduated from Glendale in 2004.

So it should come as no surprise that Melikyan has achieved his own level of success at GCC. He is a Biology major with a 3.9 GPA and balances his studies with his responsibilities as the ASGCC President for the 2018-19 school year.

All of which is a little surprising as Melikyan was hoping to attend a four-year school before graduating from Burbank High in 2016. But he turned his attention to GCC and then took over as ASGCC President in the spring of 2018 after David Khechumyan won the election but decided to attend USC instead.

Melikyan won the election last year as the Vice President of Administration before he was tapped to take over as President.

“The effect GCC has had on me really goes without saying, he said. “From the individuals that have mentored me to my administrative team, it has been an awesome experience for me and I can’t say enough good things about Glendale College.’’