It's August 1937 and the new Verdugo Campus of Glendale Junior College was only weeks away from opening for its first full semester. Students campaigned throughout the city to convince the voters to pass a bond issue that made construction of the new campus possible. 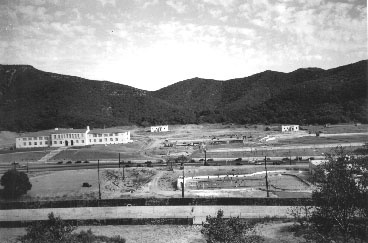 Glendale College in the 1930s

Note: Glendale College's early years reveal an energetic student body and a strong ambition to make the college bigger and better. This short article takes you back to the 1930s and the hijinks, hardships and hard work that have led to the GCC we know today.

Glendale Junior College, which had opened in 1927 with 139 students, erupted in class warfare that flapped over the Fall 1930 semester.

It began when three freshmen lifted a sheet from the Glendale YMCA and painted "Frosh" on it in bold letters. Under the cover of darkness, one of them hoisted the banner to the top of the campus flag pole, carefully greasing it on the way down to ward off upper classmen.

When dawn came, "There was a riot at the flag pole," claimed a student account. "Classes were discontinued for two days as fire hoses and all available and unavailable equipment was put into use. The faculty wailed at the empty class rooms."

The sophs' revenge was swift: a group of them kidnapped the freshman vice president and held him hostage for several hours in Griffith Park. At the pleas of the administration, a compromise was made: the freshman leader was released, and the flag was removed.

At the end of the semester, the lingering grudge was settled amicably enough--even though sophomores eventually stole the flag, ripped it to shreds and hoisted the rags up the flag pole. The students held a Class Day, where each class defended its honor with, among other things, a tug-o-war over a campus mud hole.

Glendale Junior College, which later came to be known as Glendale College and eventually as Glendale Community College, started small and simple. Established by local voters, it operated for two years out of the west wing of Glendale Union High School on East Broadway. In 1929, the college moved to the corner of Harvard and Louise--the site of today's Glendale Central Library--where it occupied a campus that had served younger students since 1908.

The gray stone buildings of the Harvard Campus were perhaps a little too historic. The 1933 Long Beach earthquake damaged the main buildings so severely that state inspectors ruled that classes could no longer be held in them. From Spring 1934 to Spring 1937, classes were held in 15 tent bungalows.

Wrote Chester Lynch in his 1987 history of the college: "Going to classes in tents had advantages. If you were not particularly interested in what your instructor was saying, you could listen to the instructors in the tents on either side two or three over if you wished."

A contemporary account was a little less charitable, however, saying that "Tent City" featured "unbearable heat in the summer months, with equally unbearable cold and dampness in winter."

It wasn't all grim, though. The tents were linked by a network of boardwalks which apparently encouraged some students to roller skate from class to class.

Clearly, though, students and faculty wanted to get back into real classrooms. That yearning was channeled into a 1935 bond measure to build a new campus on North Verdugo Road with local and federal Works Progress Administration money.

According to a 1939 account, the student body "displayed more school spirit ... than any year before or since. Every student worked to put the bonds across, and it is to every member of this class that all succeeding classes owe the Verdugo Campus."

When the measure carried by a citywide vote of 7705-1848 on Oct. 5, 1935, the students staged a gigantic snake dance through the main streets of Glendale, followed by a bonfire on the campus which over one thousand townspeople attended.

The new campus prompted changes. In keeping with its Spanish architecture, the Buccaneer mascot was keelhauled in favor of the Vaquero. The student newspaper and yearbook, the Galleon and Log respectively, were renamed the El Vaquero and La Reata. School colors were changed from orange and black to maroon and gold by vote of the student body. Songs, yells and names of clubs were changed.

But the war between the freshmen and the sophomores continued on. They clashed on the new campus for the first time in a January 1938 event called "The Big Brawl."

After the 1933 earthquake rendered Glendale Junior College's main buildings unsafe, classes were moved into tents. Many of the tents were linked by temporary wooden walkways, which led to a short-lived fad: roller skating to class. Back then, the college was located at Louise and Harvard, the current site of the Glendale Public Library.