In an effort to support social distancing efforts, the Art Gallery @ GCC is closed for Spring 2020.

Our current exhibition will be held over when campus reopens for face-to-face instruction, TBD. 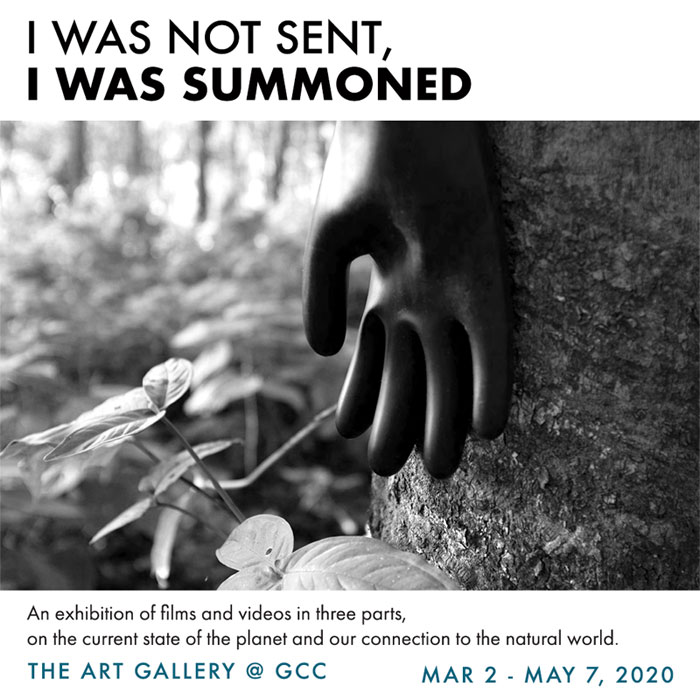 I WAS NOT SENT,
I WAS SUMMONED

March 2 - May 8, 2020
An exhibition of films and videos in three parts, reflecting on the current state of the planet and our connection to the natural world.

from the curator:
"I was not sent, I was summoned proposes that the current state of the planet is a call for the awakening of the human soul. Nature’s howl does not carry a lesson, but instead stirs us from our slumber to remind us what has been forgotten: a reminder of our deep and intertwined connection with all that exists. As we are part of this integral whole, the ecological crisis that we are experiencing is likely a mirror of our inner world, and of the fractured state of the collective consciousness. Perhaps what we are witnessing is the collapse of old structures and narratives— and the emergence of a new vision and newfound freedom.

Borrowing its title from Sophia Al Maria’s film The Magical State (2017), I was not sent, I was summoned, presumes that it is the human spirit that is demanding an awakening and restructuring of human consciousness. There is an urgency to save our planet, but this won’t be fulfilled until we fully grasp that the healing of the earth will come through our own internal healing.

The films and videos in the exhibition don't condemn or denounce but are instead gestures towards a reconciliation of our relationship with nature, the cosmos, and our personal healing. The work of these artists fall into alignment with the concept of ‘shamanic cinema’, as conceived by Chilean filmmaker Raul Ruiz, where “the shamanic sequence makes us believe we remember events which we have not experienced, and puts these fabricated memories in touch with genuine memories which we never thought to see again and which now rise up and march towards us like the living dead in a horror movie. This mechanism is the first step in a process which could permit us to pass from our own world into the animal, vegetable, and mineral kingdoms, even to the stars, before returning to humanity again.”

Still from Carolina Caycedo, Thanks For Hosting Us,We Are Healing our Broken Bodies, 2015 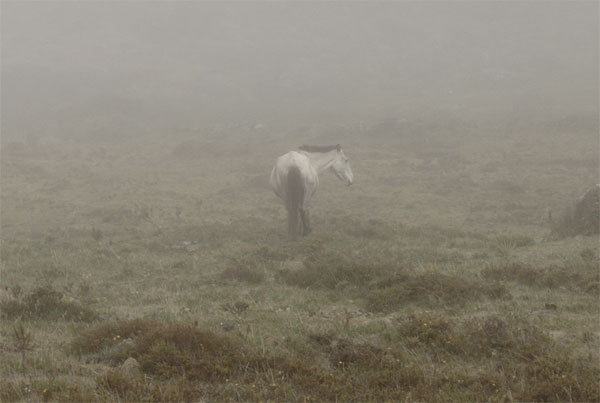 Part 3: The Future
Monday, April 20th to Thursday, May 7th

Still from Salomé Lamas, Extraction the Raft of the Medusa, 2019

Maya Watanabe, Stasis, 2018, 9:24 min
Biostasis is a period of steady inactivity in which an organism, while remaining alive, undergoes the suspension of all its metabolic processes. Crucian carps can survive winter water temperatures below 0 degrees C by adopting a biostasis state, a combination of freeze-tolerance strategies and resistance to oxygen’s absence. Under that condition, bodily animation stops, metabolic processes cease, and cell’s energy is decreased to the bare minimum to keep the tissues alive. When the warm months come again and the water melts, carps resume their normal life functions.

Sophia Al Maria, The Magical State, 2017, 6:15 min
Shot in la Guajira peninsula in Colombia, the location of one of the world's largest open-pit coal mines, Sophia Al Maria addresses the issue of fossil fuel extraction. A young woman from the Wayuu tribe indigenous to the area is interrogated by an unseen Spanish-speaking man. She becomes possessed by the angry spirit of a 40 million year old oil demon awakened by mining. The Magical State is a film intended to shake the viewer into the knowledge that we are the exploiters and we must be stopped.

Carolina Caycedo, Thanks For Hosting Us, We Are Healing our Broken Bodies, 2015, 5:20 min
Human bodies appear incomplete, divided and fractured by water and fabrics as a way to address the cementing, impoundment, and fragmenting of local streams and rivers. The body parts search for each other in an attempt to reconstitute as a collective body. Towards the end of the film a complete human body is revealed, suggesting that if we dismantle infrastructure that divides and splinter bodies of water, riparian ecosystems might stand a chance to become whole again.

Filmed on location in the San Gabriel River and the Wanaawna (Santa Ana) river mouth, this inaugural and site specific activation of the Water Portraits series is the first step towards building a healing relationship with the land and the waters of the unceded Tongva and Acjachemen territories, known by many as Orange County. We are grateful to our human and natural indigenous hosts who have sustained us, despite being submitted to violent processes of colonization and extraction

Shanna Yates, Healing of Place I, 2019, 2:22 min
On becoming a butterfly, a woman, a rushing creek, or a tree. I dance to the invisible rhythm of transformation, a metamorphosis of the mind and soul. Part of a larger body of work, Eye in Temenos, this film is about becoming with the environment, rather than separately from it, as an ‘other’. This sort of engagement requires a non-Platonian inquiry, a place for feeling before seeing, a place of intuition.

The movements speak to the invisible shifts in the boulders, the swaying of the trees, the rushing of the water in the creek. Everything is a part of me, and I am a part of everything. For the briefest of moments, a common language spans the dualistic perception of the human psyche. And in the alchemical equation of death and rebirth, a subtle but deeply transformative shift occurs in the lens of perception. A healing of place.

Adrián Balseca, The Skin of Labour, 2016, 9:30 min
Adrián Balseca’s filmography frequently creates situations that complicate and subvert the national discourses and symbolic order of modernity. His work revises history and a series of processes associated with colonial violence, the birth of the American republics and sequential acts of environmental aggression, critically observing the changes that have occurred in the forms of emotional and economic production over the last two centuries. Balseca focuses on the tensions between the exploration and exploitation of southern-cone nations and the industrialization of the West.

The Skin of Labour is a work that explores the memory of rubber-tapping in the Amazon. The artist films the extraction of latex from the tropical landscape. The white liquid trickling from the tree bark is collected in a hand-shaped, glove-like receptacle, an allegory for the largely enslaved workforce and exploited Amerindian ethnicities that underpinned the rubber economy.

As such, as in earlier works, the artist builds a tension between the elements being represented: on the one hand, we have the beauty of the bleeding latex (with all the connotations this conjures, particularly associations with semen and breast milk), and, on the other, the phantasmagoric presence of death in the midst of nature. The allusion to “skin” is made through the scarred bark, a symbol also of cruelty against human and plant life, the backbone of the extractivist model that sustains our society to this day. — Miguel A. López

This work is an intent of a more complete vision of what could be called a reality full of mystery. There is a kind of invisible being that bears witness to the relationship of a group of people with nature, used as a sacred space and alien to any Eurocentric vision. Where the syncretism between divinity and nature is a source of devotion and mystery, in search of a quiet acceptance of life, a hidden paradise, and accompanied by a sad silent joy.

Beatriz Santiago Muñoz, Farmacopea, 2013, 5:38 min
Farmacopeas are catalogs of plants and their uses. Farmacopea is a film on the relationship between historical processes and the natural landscape of Puerto Rico. Hippomane mancinella, the little apple of death, is one of the most toxic plants in the world. Just sitting beneath it for an afternoon can make you sick for days. If the tree is burned, its smoke can be dangerous and cause permanent blindness. Though it was an important part of the native farmacopea, most Manchineel trees were eradicated. The landscape of the Caribbean has been thoroughly transformed: physically, through introduced species, agriculture and development but also through its visual representation as an undifferentiated tropical place for tourism, service and folklore.

Malena Szlam, ALTIPLANO, 2018, 16 min
Filmed in the Andean Mountains in the traditional lands of the Atacameño, Aymara, and Calchaquí-Diaguita in Northern Chile and Northwest Argentina, ALTIPLANO takes place within a geological universe of ancestral salt flats, volcanic deserts, and colored lakes. Fusing earth with sky, day with night, heartbeat with mountain, and mineral with iridescent cloud, ALTIPLANO  reveals a vibrating landscape in which a bright blue sun threatens to eclipse a blood-red moon.

Part 3: The Future
Monday, April 20th to Thursday, May 7th

Wayward Fronds references a series of historical events that helped shape the Florida Everglades today, while fictionalizing its geological future and its effects on both native and exotic inhabitants. Guided by recent talks in the Florida legislature to finally disburse billions of dollars in restoration funds, events in this film unfold by giving way to a future eco-flourished Everglades. Nature begins to take over, en-gulfs and tames civilization after centuries of attack, and even guides it into its mysterious aqueous depths, forcing humans to adapt and evolve to its surroundings.

Exit Mountain and turn LEFT down the hill.

Enter Lot C on your RIGHT.

Make sure to buy a parking pass for $3 upon entering GCC.

Once walking, exit to the ground floor of the parking structure. There is ample signage to the Art Gallery.

Look for the footbridge beyond the parking structure.

Take the elevator down to main campus.